On returning to running 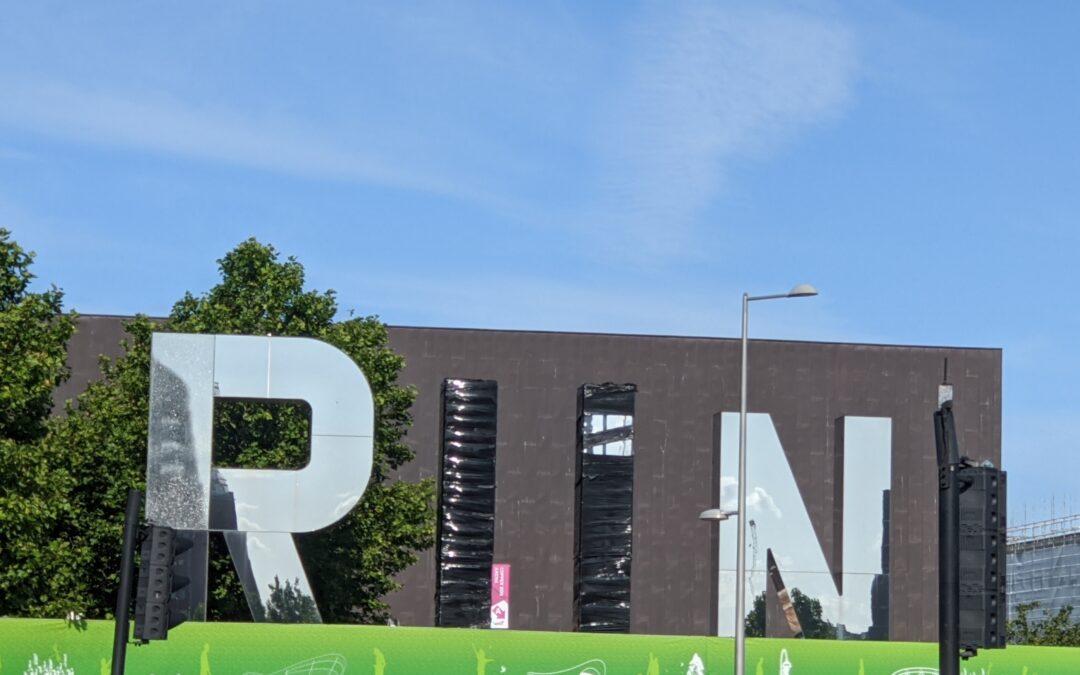 Those of you that have stuck with me and this blog for a while know that during the first Lockdown in 2020 I took up running, and had a go at the Couch to 5k .  I had been someone who said they hated running, and I finally started to understand why people voluntarily run.  I had just started to enjoy it, when I was beset with injuries, starting with an old ankle injury on my right side, and then on the left, then knee pain that meant I couldn’t walk up and down stairs.  I had to stop and tried to get some advice and did self treatment.  But, I persevered with it and tried to not over do it, as I really wanted to complete the Couch to 5k system. I then stopped running as I was back at work. In January, in an attempt to get myself out of my Winter blues funk I went for another run, but had to stop with horrible knee pain starting after 2 kilometres.  Which added to the sense of downness I was feeling at the time.   I was also reminded of an off hand comment made by a trainer at a workshop on foot mechanics who took one look at my feet and said “Oh, I wouldn’t trust them!”, to which I replied “They’re the only ones I have, so I have to!”  I wasn’t particularly pleased and had no clue on how to improve things.

The massage therapist I go to see for my treatments told me “Your body just doesn’t like running.”

But, that wasn’t how it felt to me.  At the beginning of the run my body and mind had both felt like there was a sigh of relief to be being active.  Mind and body seemed to be on the same page, then after a short while my body wasn’t able to cope.  That didn’t help my general mood, and I kind of wrote off the idea of running as a form of exercise that I could do.  I’d actually look jealously at the runners that appeared to be happily loping past me with ease (Ok some definitely looked more comfortable than others.) and I’d be trying to analyse what they were doing that I wasn’t able to achieve.

My percieved symptoms were strange: my feet, legs, hips appeared to be perfectly neutral whilst I was running, but after a while it would feel like my left foot was being pulled outwards with a rotation from the knee.  Then my knee would suddenly become white hot agony at the top of the fibula bone and the posterior lateral area and the rest of my knee felt wrong.  I did some research on all of the ankle pain issues and running issues that I came across did not describe anything that I was suffering from, so I was none the wiser. It was always about achilles tendon pain or weak glutes, which from the tests I was doing on myself I thought my glutes were ok.

Then a post on instagram caught my eye. It was this one posted by Gait Happens and it shows a client on a treadmill walking along.  What really caught my attention was that they were doing something with their big toes that I do: they were walking with their big toes pointing up in the air (like they were giving a big thumbs up).  People have always said I was strange doing this, but to me it was totally normal.

So I eagerly read the post about what Gait Happens were noticing, not really paying attention to the client’s pain pattern.  They were commenting on that the client has a rigid plantar flexed first ray.  In other words their big toe (from the metatarsal onwards)  is held lower than the other four toes so it hits the ground first and forcibly tilts the foot over onto the outer edges.  This causes the big toe to stick up, and they have high arches.  Another thing that I have.

Then they talked about the fact that this patient also had a enlarged heel which is something called a Haglunds’ Deformity. This is sometimes called a Pump Bump, and is the body’s response to additional strain in the calf muscles.  Yet another “odd” thing that I have going on with my feet, which makes new shoes agony for me.

I have an I have always put this down as my body’s response to a massive  growth spurt when I was 14 years old where I think I grew about 12 inches one summer, but definitely grew three shoe sizes in 3 months.  My mother always made sure I had my feet properly measured when getting new  shoes and I went from a size 6 to a size 9.  I now also remember that I always wore my shoes down on the outside so the high arch  may have preceded this growth spurt.

So the next interesting thing is that the post suggested a relatively simple solution: orthotics to support the base of the 2nd to 4th toes so my foot doesn’t tip over to the outer edge on contact. So I saw the podiatrist at the Clinics I work at (yes she is very busy and there was a wait to see her) and she thought it was a reasonable diagnosis.  She also noticed that I did a twist on my big toe to compensate on reduced dorsifexion of the ankle as well.  So she adapted some insoles for me and off I walked, feeling very strange on these uneven orthotics.  She did warn me to let my body adjust for a couple of days before going running, which I did.  I could definitely feel like the orthotics were making my hip muscles work very differently.

I decided that I would give it a couple of days rest and then try a second run to see whether the same thing happened.

The second run was free from knee pain. Hallelujah! There was no pain on the run nor after.  So I tried a third run: again there is no pain.  I have been keeping to the shorter periods of running and am increasing the duration after a week of repeating the same run pattern.  But I seem to have cracked it, with help from the Podiatrist and an unknown client who walks the same as me.

How it makes me feel

I can feel how good it is for me to run on a mental level and I now completely get why people run.  Although to be honest I have no desire to run more than about 30-40 minutes at a time.  It is the getting out an being active that I enjoy.  I don’t have the stress of riding the bike (or having to get the bike out), I get changed and put the running shoes on and start my tunes and I can be off.

I have also realised that my body confidence has also improved, which includes me running across the marshes (not a built up area) without my top on.  That is something that I did start doing when initially running, but the confidence to do that disappeared on injurying myself, but it came back with running.  That is why I shared the picture of myself running without a top on.  I still don’t do it in built up areas or if there are lots of women around (who might take offence) .

So I am going to keep running for now, and take it slowly.

For those that want to know what I run to, this is my Spotify Playlist.  I particularly enjoy running to Juno Reactor’s Conga Fury, and the Antonius Remix of Hans Zimmer’s Romani Holiday.  Whilst Lady Gaga’s Teeth helps get me to the end of the run.

So that’s the latest update on my running and fingers crossed it will continue.  It’s not that I want to run long distances (and I have no plan to run a marathon) but feel that a 30-40 minute run will help keep me fit and healthy. 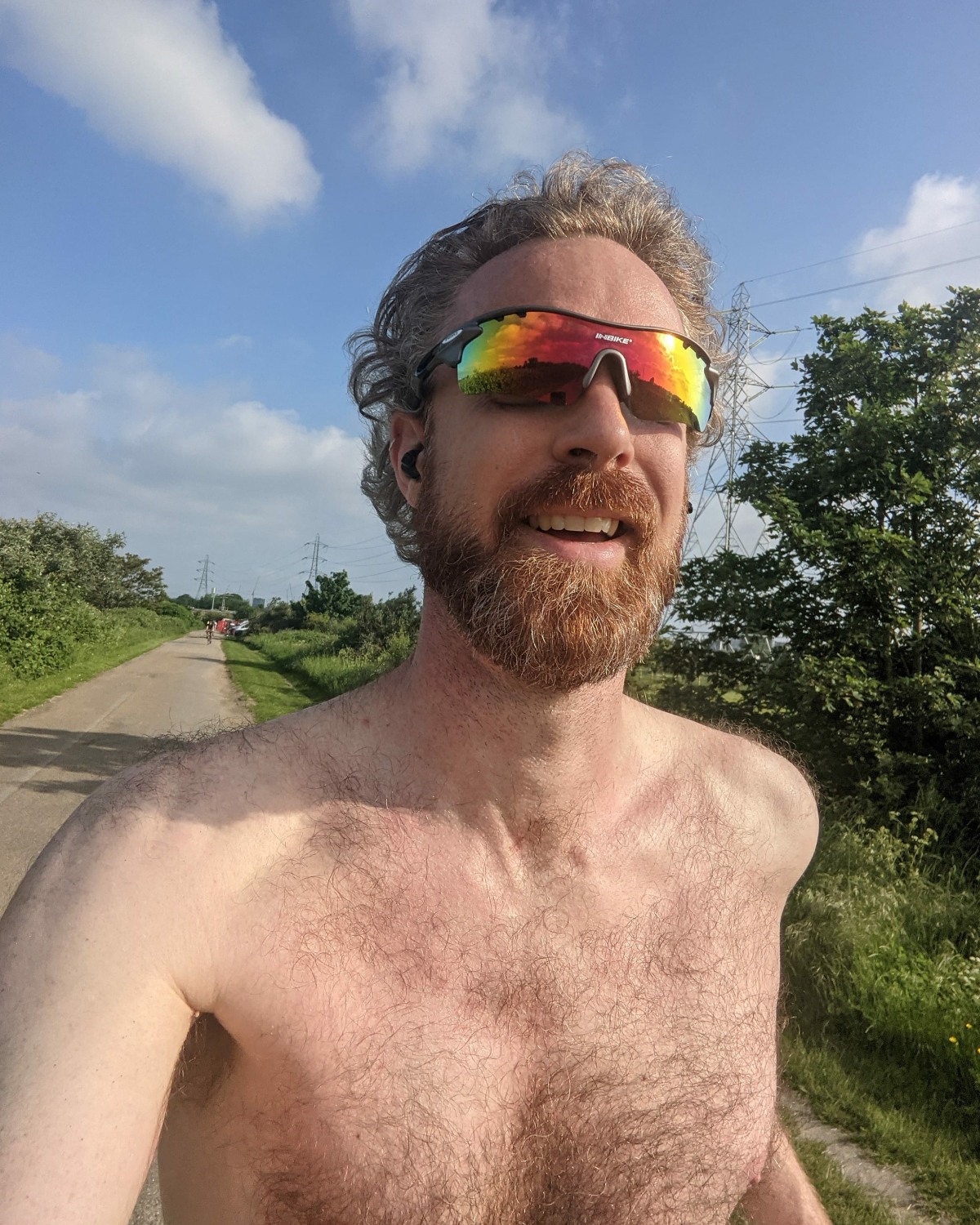 Even though we are out of lockdown I am still running my online yoga and SMFRTherapy classes each week: