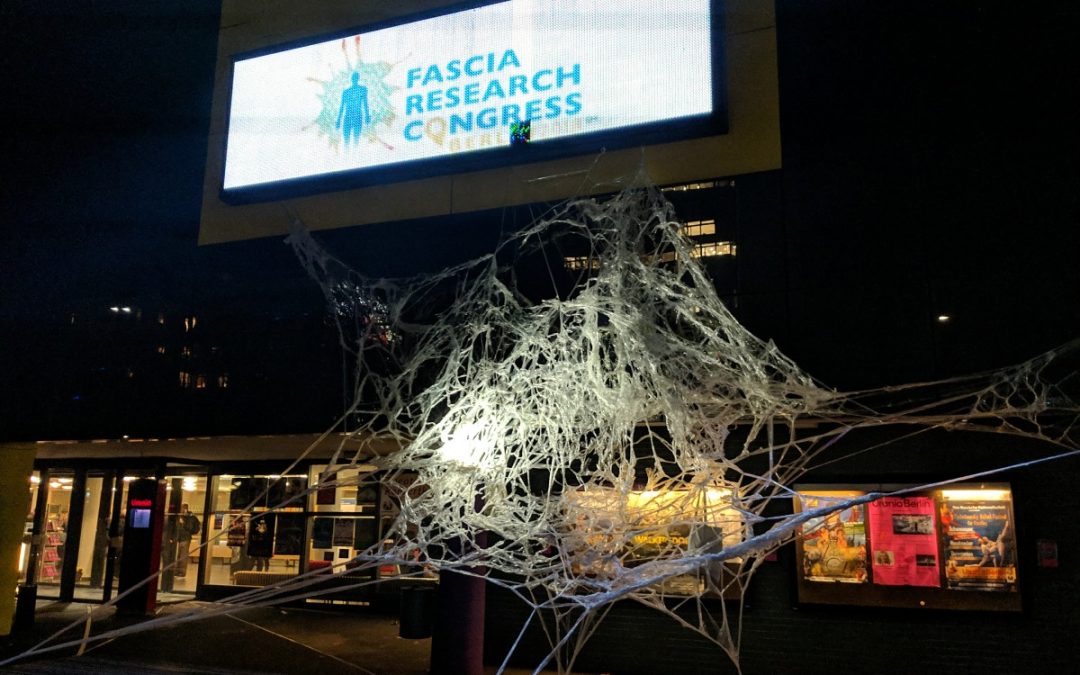 So, I spent two weeks of November dashing around doing lots of training and courses (initially the Myofascial Release UK MFR Me, and Unwinding courses, great fun, but nothing much happened to write about).  But immediately after that I travelled to Berlin to attend the 5th International Fascia Research Congress, and also to do a couple of courses.

The FRC happens every 3 years or so, and last time was in Washington, which seemed quite a way to go to me at that time.  The FRC is for Researchers to present their scientific research, which makes less directly applicable to the clinic setting, unlike the British Fascia Symposium where the presenters are Clinicians presenting their subjects.  However, I want to understand what is happening under my hands as I work and staying up to date (as best I can) with the Published research is important to me.

This event gathers together people from around the world, so there are pre-conference training days and also post-conference (and post German Osteopathic convention, which happened immediately after and I didn’t attend).  This opportunity was too good to miss, even though this year was a year of learning nothing new, and why I did some additional training days.  You know I always love to learn new things. 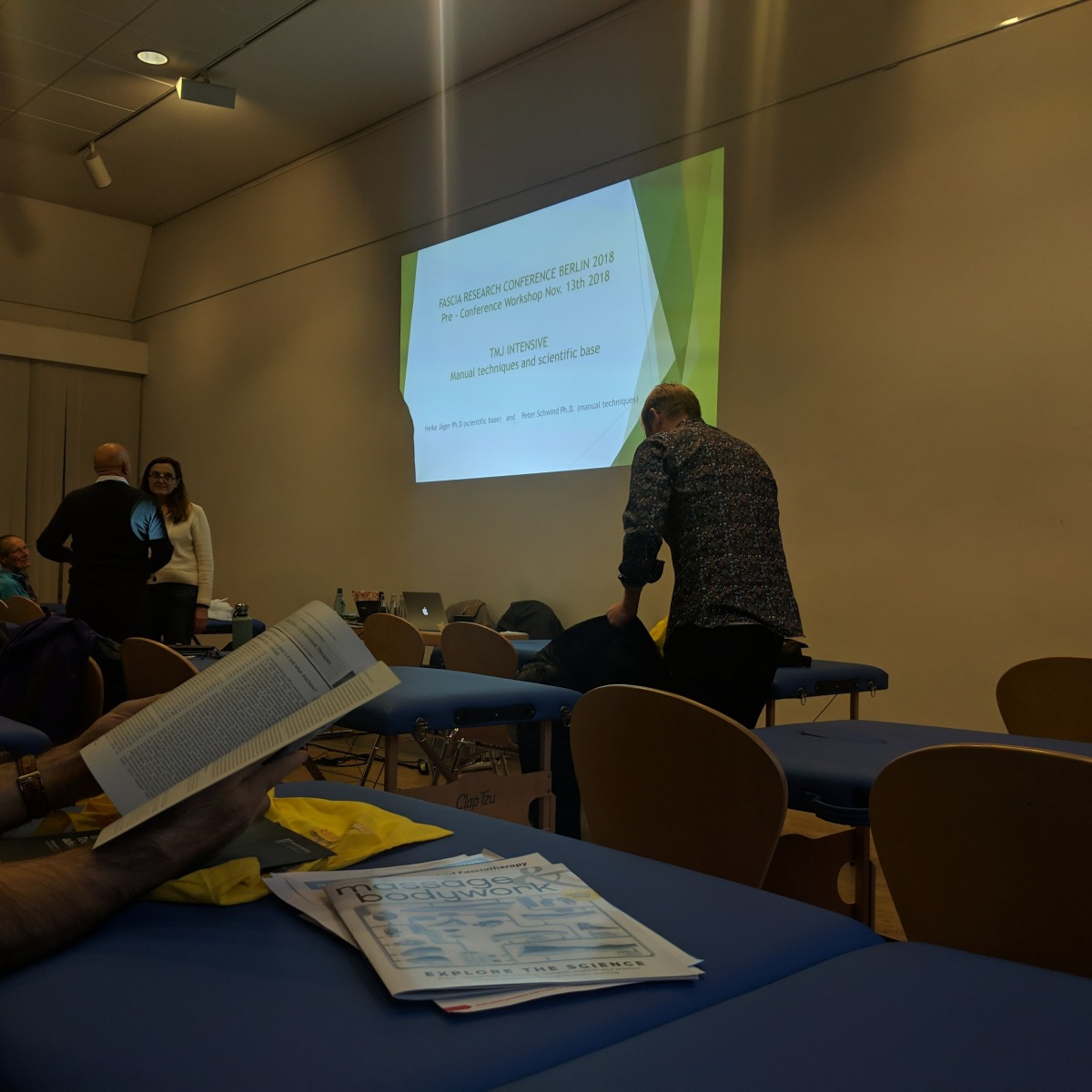 The TMJ (Temporomandibular joint) and the way problems with jaw muscles can create pain in the head and face was my way into working with the Fascial network.  It is still and area of interest for me and so any opportunities to learn more ways to help others with issues in this area I’ll jump at the chance.

The day was a mix of Practical, taught by Peter Schwind, and Research, presented by Hilke Jager.  It was a whirlwind of a tour with many ways to work in this area that is normally taught over three days (and we did most of it in one).  We looked at a number of diagnostic tools and ways to work the maxilla (the two bones that form the hard palette) which seem to have a profound affect on the functioning of the jaw.  So this will probably explain why I will be spending quite a bit of time with my fingers in people’s mouths.

The FRC days both had a similar structure: the morning had four lectures by the keynote speakers, with the afternoon having parallel groups of presentations of smaller research.  The first day did start sligthly differently as we paused to remember Leon Chaitow who passed away in October 2018.  Leon Chaitow was an Osteopath, who was passionate about teaching others and he wrote and co-authored numerous books on different techniques and practices within the bodywork world.  He also edited the Journal of Bodywork and Movement Therapies and created and led the Fascial Research Society.  He will be sorely missed.

The first lecturer of the Congress was Dan Leberman who talked about the role of evolution on the development (and maintenance) of the Iliotibial band (ITB, and used for bringing the leg forward with minimal effort) and the plantar fascia.  He was followed by Melody Swartz, who gave a very interesting discussion about the lymphatic system and how the pre-lymphatic system is heavily dependent on the Extra Cellular Matrix (ECM) component of the fascia.  She exhorted us to keep things moving and to get the ECM moving as this will help keep the immune system functioning well.

The second pairing was L’Hocine Yahia and Adamantios Arampatzis, who both gave excellent but very dense lecture on the biophysics of the spine and the neuromuscular capacity and motor function respectively.  I will confess that I struggled to keep up with their lectures as they both had strong accents (I take my hat off to them for lecturing in a foreign language) and they were very fast speakers on very technical topics.  I will be following up on their stuff and investigating what they were discussing and the key concepts they introduced.

The afternoon presentations looked at the role of foam rolling vs using a vibrating shearing blade (which was more effective); a surprisingly interesting discussion on computer modelling of the fascia lata (not clinically relevant, but quite intriguing); the state of current myofascial research (improving as more is done, but still need to work out an ideal sham approach for body work in research); and the effectiveness of Myofascial Induction on posture and also range of motion in the shoulder, both of which showed some improvement, but not masses.

There was a major discussion happening in and around the conference centre over conflicting research on Bodywork and Cancer.  In her keynote speech Melody Swartz said that in her opinion maintaining a healthy ECM through hydration and movement should be key when dealing with cancer as this helps the immune system (dependent on the Lymphatic system) do its job.  This was opposed in a parallel speech by Peter Friedhl who said the latest research evidence he has suggests never to treat directly on tumours as this can spread the cells. Then Carla Stecco is also meant to have said that working in areas away from the tumours should be safe, but more research is needed.  These discussions, whilst confusing, are where these gatherings are important as they prompt debate and more research.  I’m not entirely sure of where I stand on this, but it is an area to follow and to stay up to date on the latest research. 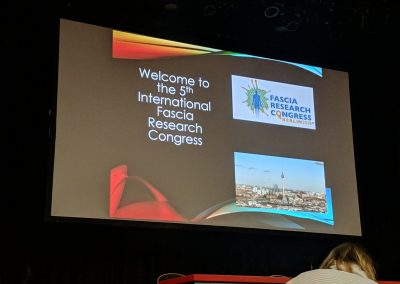 Welcome to the FRC 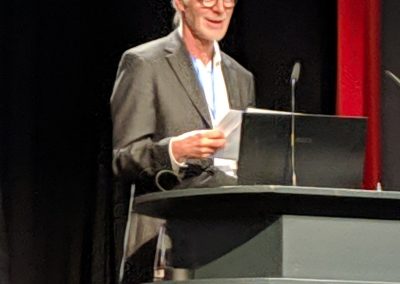 Not giving a talk this time, but making some announcements 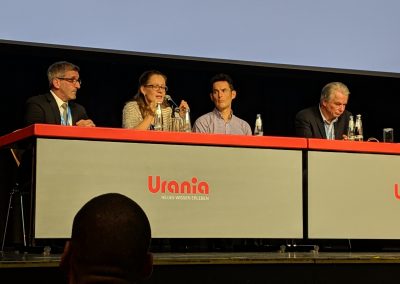 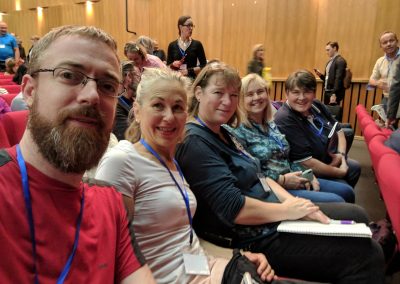 The MFR UK/JFB MFR crew at the FRC

Day two started bright and early (8am!!!) with a wonderful couple of lectures.  The first was delivered by Carla Stecco (the “Goddess of Fascial Research) about the matrix biology of Fascia (Fah-sha, as Carla pronounces it). I was also confused and mesmerised by her pronounciation of Gil Hedley’s name which seemed to not involve any consonants whatsoever (Ghee-eh-lee).  This was followed by Heptologist (Liver specialist) Neil Theise who became very famous earlier this year with the article he co-authored about a new organ called the Interstitium (i.e. the fascial network) made main stream media news.  His lecture was as much a discussion about how they discovered it, and their conclusions, and the fact that areas of research can often not know what other areas are studying, but things are changing. He also lamented over the way that research papers are often misreported by the media, as some of the things the paper was meant to have claimed were never mentioned in the research.

This was followed by Frank Willard looking at the nerves and structure of the Lumbar spine (really interesting to see the variability in the path the nerves take in and around the lumbar vertebrae).  Paul Hodges then gave a fascinating discussion about the role of pain and movement, with the overall idea that movement is important to re-introduce as soon as possible and can be helpful even in the acute phase, but at an appropriate level for the structure damaged.

The afternoon’s research presentations included changes to ankle function and taking oral collagen supplements (mechanically made no difference, but functionally some improvement); the changes in the fascia of the arm and elbow after exercise (this was two papers, and the fascia becomes stiffer for four weeks after exercise); the function of the fascia of the abdominal muscles (that looked at the different connections and how they slide past each other); and changes to the fascia of the forearm and wrist in people with Carpal Tunnel Syndrome (that there are changes and issues all the way up the arm).

The conference finished with an award ceremony, and a brief word from Sasha Chaitow (the daughter of the late Leon Chaitow) who exorted us as therapists to not take the science at face value, but to examine the evidence, and to also provide the questions for researchers.  She got a well deserved standing ovation. 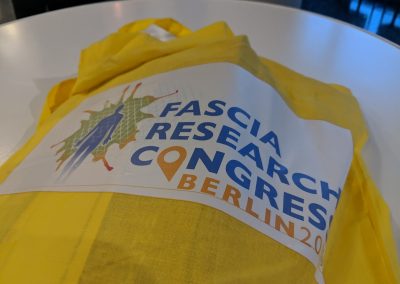 Made from packing tape, and really effective 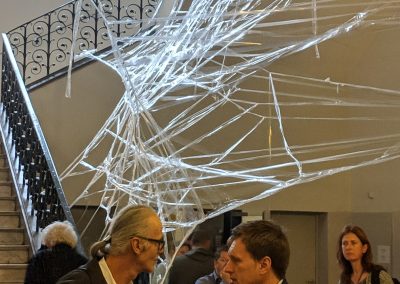 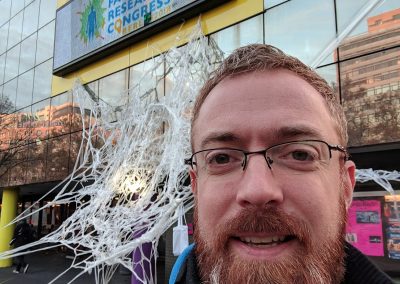 Me at the FRC

Just to prove I was there

The last two days of training were with Susan Chapelle, who is a Canadian Manual Therapist, who studies the effects of manual therapy on adhesions and scarring.  She’s been doing this research for over 7 years and has developed an allergy to the rats she uses for testing.  This hasn’t stopped her as she now wears a hazmat suit to do the research in.

One of the first things she wanted to clear up was the difference between scars and adhesions: Scar tissue is the repair of cut/torn tissues and will always be present; adhesions are where the body’s normal response to damage, and inflammation, releases a substance that can glue structures together that should be sliding past each other.

This course was a mix of research and information and a limited amount of practical.  The main points of information I learnt is that about 3-10 days after you damage muscles or tendons you want to be gently mobilising the injured area as this will minimise the adhesions that can develop around the scarring.  However, if you have torn the tendon or ligament from the bone, then you’ll need to rest for 8 weeks so that the attachment is strong enough to function properly, and then you can start to mobilise.  So you need to know what’s been damaged.

However, when damage occurs in the abdomen (surgery, or aggressive abdominal work), adhesions start to form about 2 hours after injury and gentle jiggling (created by walking or if not then gentle wobbling of the abdomen with the hands) should be done periodically for the next 5 days to prevent unhelpful adhesions.  This jiggling also needs to happen after aggressive abdominal work to release adhesions, so I will be getting people to wobble their bellies in future to minimise unhelpful adhesions developing.

We also learnt a lot about the nerves and how they can grow into, and have a fondness for, scar tissue and adhesions.  Some of this became very specific about neurophysiology and it has highlighted a need for me to get to grips with this in greater depth.

So, that’s a summary of what I got up to in Berlin.  Although I did manage to grab a short city break as well, it was a long period of learning lots of new information.  Which has also had the effect of highlighting areas of more research and elements of anatomy that I could do with investigating.  Which is always to the best.

So will I be going to the International Fascia Research Congress in Montreal in 2021?  Most likely, so I had better start saving.

Thanks for reading this, my lovely Interonauts, 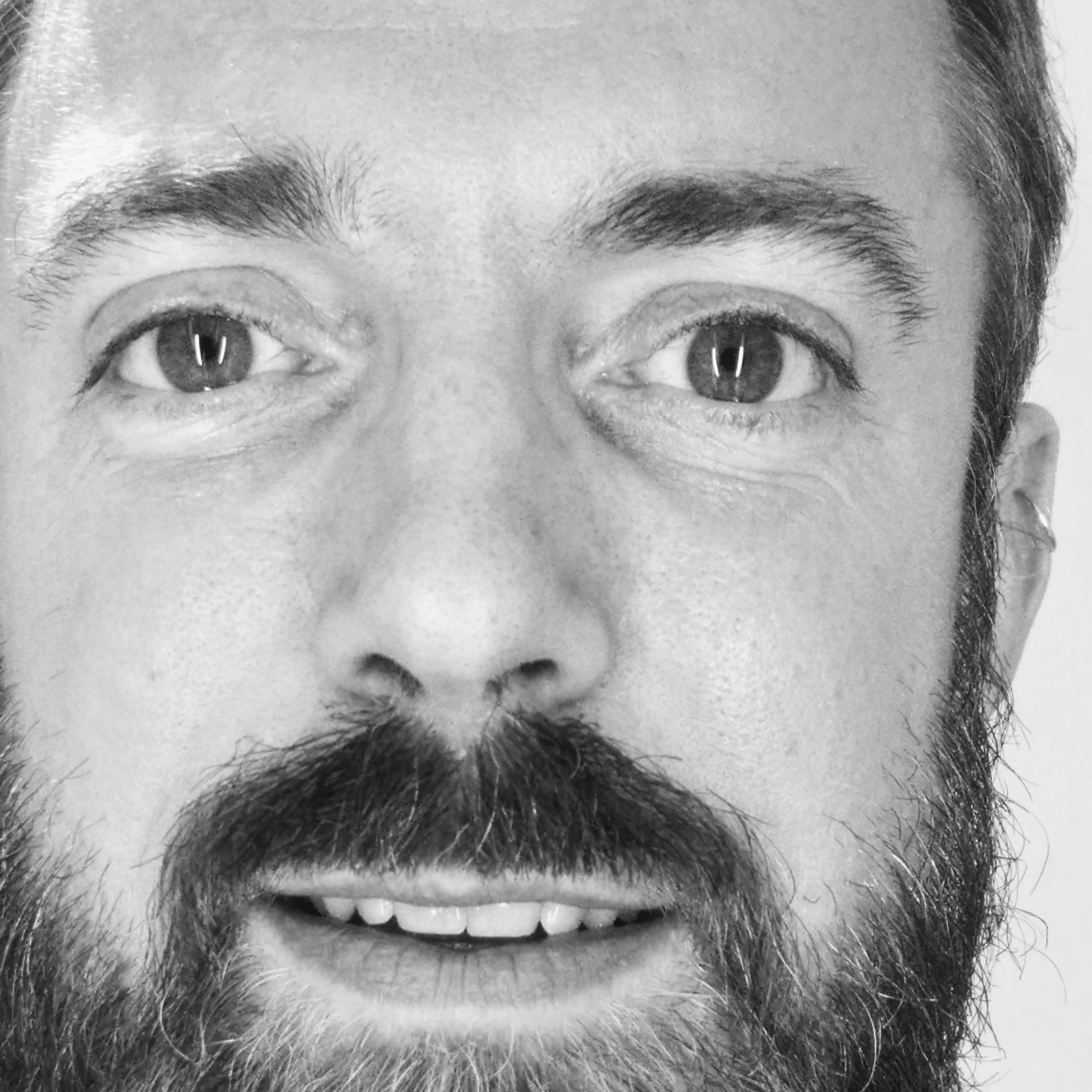